Interview in Temple of Perdition Webzine 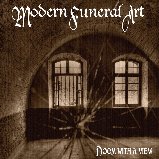 Despite a very solid 2nd album - called "Doom With a View" and released a couple of years ago, MODERN FUNERAL ART is not a name that comes up often in conversations about the french scene, which seems really unfair in my opinion, even if -as you'll see- the band is not particularly looking for more than just their own pleasure... Yet, their style consists in an original form of early 90's UK Doom (think about early P.L., Cathedral, MDB) with very special vocals that we usually find in different genres (somewhere between post-punk, neo-folk or gothic...). Maybe those vocals are the kind of love it or hate it (no need to tell ya which is my camp !), but it remains undeniable that awesome songs like "Alexander", "Dante in the Dusky Woods", "Aroundthe Graves" or "Friends of Hell" contain a batch of big doomy riffs with catchy choruses that enhance the impact of refined occult lyrics.
I was interested to know more about this nice but weird band and asked them a few questions, hoping to get some interesting fresh news about a new album too...
Your 2nd album "doom with a view" has been released about two years ago now, but - despite very positive reviews - the name of M.F.A. remains pretty confidential...
We’re very satisfied with the feedback about “Doom with a view” , a lot of positive reviews , radio plays and interviews but we were very unlucky with our label choice : at first we signed with a Netherland based label who promised to release the album during more than one year and nothing …… after long months of lies I decided to contact Ed from Doommantia.com/DMA Records who is a long time friend , a real doom activist and a big MFA supporter, we decided to co-produce the album and for me it was a very good decision.

Unfortunately Ed had very serious health problems and stopped DMA Records, you can contact me if you want a physical copy of “Doom with a view”.

I would add a word about Ed and Doommantia.com , he really need helps because after his heart-attack he needs lot of meds and can’t afford it : you can make a donation at doommantia.com


There's certainly various reasons to this , I mean your history seems to have never been easy (line-up problems leading strangely to a 1st album without the compositor of the band, long quest for a deal with DMA which quickly end all activities, important geographical separation between members, the fact to not destined the band to any live performance...) all this seems pretty special from the outside...

MFA has never really been a band in a traditional form , since the beginning we decided to exclude live performance , most of our influences especially early 90’s doom/death bands never played live.

I really think our music isn’t made for stage.

MFA is a real friend story , our first album was recorded with the help of our long time friend Stef Vanstaen ( Downfall , Discard ) as guitar player because Pascal was in England to study and during this period Stef helped us keep MFA alive.

“Doom with a view” is for me our real first album , “Hellfire” is very good but it show only the most “death-metal” side of MFA .

So how is going MFA in 2013 ? what's your position/reflection towards the actual existence and future of MFA ?

MFA is a stressless project we all have good jobs , family , kids so when the need is here …….. we plug the guitars .

Do you consider you as a doom band ? Do you feel more concerned if I speak about the UK sound of the late 80's/early 90's doom/death which seems to include a great part of your influences and still current-faves ? Regarding this, was it an almost natural choice to use Dan Swano services for "doom with a view" ?

I’m the only real doomster in the band but the early 90’s UK Doom is a big part of us .I think we’re a Doom band and the good feedback from the Doom “scene” confirms that . Doom listeners are more open-minded than metalheads in general and they can understand why we use vocals linked to the early goth scene . I prefer to use the term “post-punk” because since a decade the term “Gothic” has been associated with bitchy fronted band who think Marylin Manson created the gothic movement …….

You should listen to Virgin Prunes , Joy Division and maybe Bauhaus to understand the way we follow .
Dan Swano was a natural choice for us , we’re huge fans of Edge of Sanity and he produced lots of great albums. And it was a very very good choice , he’s a very nice , patient and open-minded person , we’re totally satisfied with his work.

Despite some imperfections in the tone and accent, I do really like the vocals on the album, melodic, melancholic but also audacious... were the usual death grunts banished from the beginning ? Are you totally satisfied of the way things (particularly vocals) are mixed on the album ?

Arnaud is a great singer , I invite you to listen to our other project Pale Roses and you will discover the total expression of his voice .
But I’m totally sure the vocals on next album will be better , only because now we will be able to record it quietly and work on it deeply .
Concerning grunts, if a part needs it maybe ….. I can do it .

The lyrical content turns pretty much around estorism and occult stuff, it's pretty rich and even ironic sometimes ("suicide pact") but I've read that you did write on different stuff for new songs, what are they dealing about ?did you feel you arrived at the end of what you could write on your spiritual masters (Lovecraft, A. Crowley...) or do you think this is temporary ?

Well, I don’t think we’re going to change our lyrical themes in a radical way. I just love everything about esoterism or occultism and there are still hundreds of things to write about, ghosts and apparitions, crop circles and UFOs, urban legends and conspiracy theories, secret societies, lost civilizations, the list can be endless. The important thing is that we never take that too seriously, and often add an ironical point of view.

Old time literature and poetry is also our main influence but of course, we’re not going to quote the unholy trinity of Lovecraft, Crowley and Poe all the time. However, we definitely want to render homage to the great authors of the 19th and 20th centuries. If I had to mention a few, I’d put forward WH Hodgson, Clark Ashton Smith, Samuel Loveman, Henry James, Montague Rhodes James, Arhtur Machen, and French ones Huysmans and Raoul De Warren.

So the next songs should not be too different from the previous ones, just a little deeper in the same crypt, which doesn’t mean it will be all death and despair. There’s room for light and hope too, but just not in a naïve way.

Are you always comfortable with the idea of never playing live ? Don't you feel sometimes the call of the scene, thinking about how awesome would it be to play a song like "Alexander" or "Dante in the dusky woods" on stage ? Despite this, are you in relation with some other frenchbands ?

Like I said in the first part of the interview MFA is not and never will be a live band , I play live sometimes with other bands especially to play covers but I never saw MFA like a live band , we’re 3 since the beginning and we don’t need other members so …… we can’t play live .

We’re from south west of France and our town was the cradle of great bands , members of Punish Yourself , Psykup , MOPA are long time friends . Concerning Doom scene ,Stef from Wedding in Hades is a good friend and Ataraxie are nice guys .

What are the plans now for MFA ? Is there any new recording planed for this year ?Are you already in quest of a new deal ?

For our next release we're thinking about a free digital release and if a label wants it for a physical release- why not...

Modern Funeral Art
2008 means rebirth for Modern Funeral Art, with all three original members aboard again, and still holding to the diversity of influences that has made us stand apart right from the start.

Doomed but not hopeless, Modern Funeral Art are back with their weird mixture of ultra heavy dark music and haunted melodies, which result in nine lullabies from beyond the grave. Neither true Doom metal nor genuine Gothic rock, it's definitely not for the narrow-minded and not for the faint hearted! Those who pay attention will get echoes of Dante's Inferno, Jack The Ripper and Aleister Crowley, among many other uncanny topics.